skip to main | skip to sidebar

The winds picked up on Saturday afternoon enough to start our turbine and it was off and running. It calmed again on Sunday morning with a forecast for high winds the next three days. By noon on Sunday the wind was up to 20 knots and our turbine was running full tilt boogie. In the first 24 hour period we generated 32 kWh. By 5:00 PM today our total production was 50kWh. To put this in perspective the Forfar Shop, Dive Compressor, and Office combined consume around 300 kWh/month. Yeah!!! We could not have asked for better conditions for testing our turbine. The students are all very proud of our accomplishment. Here a couple of videos of the turbine in action. 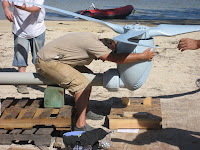 After completing our assembly we raised the tower on Thursday. The turbine was not yet attached, as this was a test raise to plumb the tower, and adjust all the guy wires. It was also an opportunity for us to develop confidence that we could raise and lower the tower with our rigging and machines.

Confident that the tower was going to go up and down just fine, we began assembly of the turbine. Pictured here we have Henry Lavine demonstrating a Sumo turbine wrestling move. I don't think they show this in the Skystream assembly manual, but it worked.

By close of the day we had our final preparations done, and knocked off early to present our energy audit findings to the staff.
Posted by Carl Adams at 5:09 PM No comments: 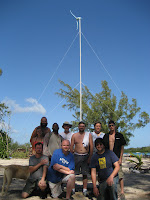 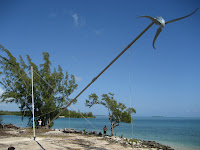 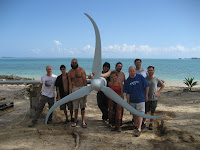 On Saturday morning we awoke to another calm day and commenced the raising of the tower. We were ready to begin raising the tower just after lunch, and there was much hooping and hollering from the crew and all those gathered as spectators.
Posted by Carl Adams at 5:32 PM 1 comment: 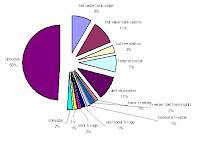 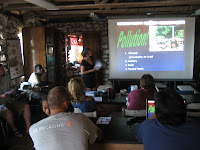 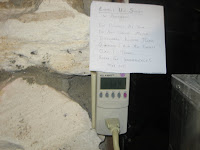 OK great we are installing a wind turbine to generate electricity for the station, and we are tuning up our solar hot water heating system for the station. But where is all the electricity we use at Forfar going? To answer that question I set the students on a project to measure and monitor the electric power consumption of the station. They worked diligently counting light bulbs, measuring electric consumption of every plug in appliance they could find, and discussing.conservation and efficiency measures. The students evaluated electrical usage and Forfar resident population data for the past three years. The conclusion of the study was a presentation to the Forfar staff which laid out a very detailed picture of where electricity is being used, recommended conservation measures, and future projects which would improve energy efficiency on the station, and renewable energy projects which could lead the station to an energy neutral position over time. The students worked very hard on the project and provided invaluable data to the Forfar staff.

Pictured is our Kill-A-Watt meter in use monitoring the coffee, microwave, and toaster station in the dining room and Eleizabeth Farrell preparing for the staff presentation.
Posted by Carl Adams at 7:40 AM No comments: 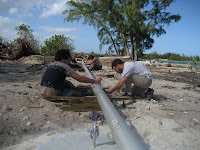 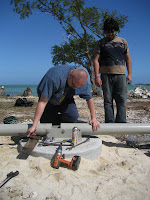 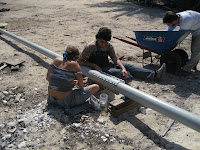 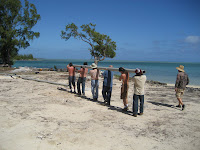 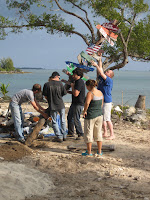 Our concrete foundations for the wind turbine have been curing as we studied solar thermal and micro hydro topics. Today we began assembly of the tower. We had been working on painting the tower and cables over the past week. Even though the tower, cables, and other steel parts are all galvanized, we are putting them up within 50 feet of the fine blue salt water of the Carribean. This is a highly corrosive environment. With everything painted we hope to hold up better to the salt spray. We started hauling and assembling the tower components into place. Here are a few pictures.
Posted by Carl Adams at 8:00 AM No comments: 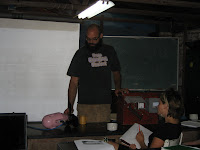 We covered Micro Hydro electric generation in the classroom. Pete Davidson came in to discuss the hydro system which was previously installed in Stafford creek. The system was overpowered by the tremendous tidal current in the creek and Pete just finished overhauling/rebuilding it. Due to our project commitments on the wind turbine and solar thermal projects we did not have time to redeploy this system, so that is left for the next class at Forfar or Pete in his spare time. Pete has proposed a battery charging system for boats on the Stafford creek. This system would provide outreach and education for the local community. When asked about the hot pink color of the turbine Pete simply said it has always been his favorite color ;D
Posted by Carl Adams at 7:34 AM No comments: 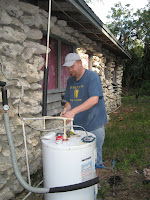 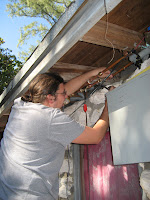 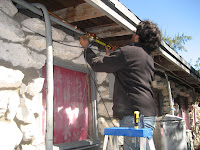 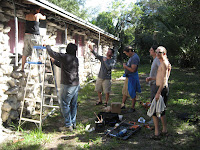 We spent some time analyzing the solar hot water heater installed on the Forfar motel. Prior to our arrival we had heard several reports regarding the system. It’s definitely not working, it’s definitely working, it might be working, it might not be working. The students and I discussed the system, during our class, reviewed the design, piping, flow rates, etc. We then decided on a set of changes we believed would improve the performance of the system. As a means of testing these changes we started by installing a Metrima BTU meter. This clever little device measures the temperature on the collector supply and return line, and the flow through the collector loop and reports the kilowatt hours of energy generated by the system. It is a utility grade meter. We then set about making our changes and monitoring the system. Our series of changes included 1) installing a shutoff valve in the electric tank which would require the system to draw off water from the solar tank rather than from the main water line when hot water was in use., 2) cleaning the solar thermal and PV panel driving the pump, 3) replacing the 5 watt PV panel with a 10 W panel, 4) replacing the 3.5 W circulating pump with a 10watt pump, 5) moving the thermal loop return to the electric water heater lower in the tank, and the elecric heating element higher in the tank. Through a systemeatic change and monitor approach we improved the system performance significantly over the week of our studies in solar thermal work. Pictures show the students installing the Metrima and making the first changes to the system. We improved the performance so much that we had to install an antiscald device in the system to ensure no one gets cooked in the shower.
Posted by Carl Adams at 7:23 AM No comments:

The winter quarter class is in Andros Island, Bahamas. The students are studying Wind, Solar Thermal, Solar PV, and Micro Hydro power systems. Our big project is the construction of a Skystream 3.7 wind turbine.